"So stupid I enjoyed it"

It's no biggie, really.

Ooooh, how I love my life! (Note the sarcasm.) All my life I've been one of the world's biggest klutz. A wonderful gene I seem to have inherited my dad. Thanks Pops! I was a rather clumsy child, always covered in scrapes and bruises. In fact we went through band-aids so often my mom always let me pick out a box of band-aids every time we went to the grocery store. I shouldn't say let, more like I'd tell her I just wanted to look at them and then she'd end up buying me a box. Yes, I was an odd child. I had a kind of obsession with band-aids.

Just to let you get a feel for how clumsy I am I'll just slip in a few anecdotes. When I was three my brother (who's three years older than me) had to get X-rays at the hospital. It was a nice wintry day, snowing fairly heavily. As we were headed toward the door Conor and I decided to pretend we were ice skaters. So we were gliding our feet along the floor and pretending to twirl around and jump. We get to the end of the hallway and because Conor was older and bigger than me he beat me there. Just as the automatic door was opening I slipped on the rug and hit my forehead against the doorjamb, splitting my forehead wide open. Now what are the chances of that? It wasn't that big of a gash though, I only had to get three stitches. I used to go to a Catholic school and stayed after during the after school program because both my parents worked. I'm not quite sure how old I was or how it happened, but I ended up running into a brick wall. Yup, I know. Go ahead and laugh. I still have a scar on my knee. Last one I swear, when I was nine or ten I played in a summer basketball league. I jumped up for a rebound, some chick pushed me, and I landed on my foot wrong. It ended up broken and I was in a boot for just about the whole summer.

Now that you understand how I get injuries quite often and sometimes in weird manners you can see how it was bound to happen again sooner or later. This evening my family sat down to a lovely dinner of tacos. And my brother  was with us for once, this hasn't happened that often ever since he turned nineteen. My puppy Maggie was all worked up because my uncle Tom stopped by to drop off some fireworks for my dad. She had just drank from her water bowl and because of her bloodhound genes her jowls were dripping water EVERYWHERE. It was totally gross. As I was trying to avoid her slobbing mouth, she bumped my leg and I slashed it on the track of the insert of the bottom of the table. And I was left with a nice wide gash on my knee. I won't go into detail, but I will say it was bleeding pretty bad. I remember saying "Why does this always happen to me?!"  a few times, which made my brother laugh. He was so sweet though, he kept asking if he could do anything to help.

My dad decided I might have to get stitches. So we went to the quick fix place (I'm not sure what it's actually called) because we would have been in the hospital emergency room for hours just waiting to get treated. The doctor came in and took a look. He said that since the metal came in at an angle there was outer skin split away from the thinner, inner skin. And it would keep breaking open because of the bend in my knee. So instead of just having it glued shut I now have seven stitches in my knee. He had to give me several shots to numb it first. I won't lie, those hurt a bit. Once it was numb he started sewing me up. It didn't hurt, of course, but it was so weird! I could feel it tugging and moving around, and I knew it should hurt. I was a little queasy at first. But now it's all good, I have to go back in twelve days to get them taken out. Oh and did I mention I'm supposed to go shopping tomorrow? Maybe I can get Jordin to wheel me around in a wheel chair...
Posted by Kate at 12:55 AM 2 comments:

I want to start off by saying I sat down here with full intentions of writing about something that's been nagging in my mind lately. But I'm pretty sure I have ADHD because I somehow ended up on Photobucket  and then I somehow ended up looking at pictures of tattoos. Don't ask how this happened, sometimes I just have no clue how my brain works. So now instead of hearing about a legit problem in my life, you will be subjected to my rambling on tattoos. 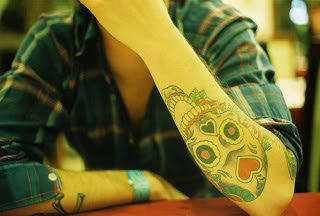 From the start tattoos have always fascinated me. I mean let's think about it. Actually liking an image/picture/quote/etc. enough to have it permanently inked onto your skin. I repeat: permanently. And it's not just like la-dee-dah I'm going to get this drawn onto my skin and it'll stay there forever! (As I believed when I was a young child.) I mean it does happen like that, except you probably won't be la-dee-dah about it (unless your a masochist or you've had it done so many times it doesn't bother you). Because it's going to hurt. A combination of my Catholic upbringing and my parent's personal opinions of tattoos influenced me to look down on tattoos/people with tattoos. It's like there's some kind of taboo on it. It can be considered trashy and scummy to have tattoos. Despite this I was always fascinated by them.

Now I may or may not have offended. You might now be considering me some snot who thinks she's better than everyone else. I promise that's not how it is. Now I think it's kind of cool. It takes some guts to go that far to express yourself, putting personal stuff out there for everyone to see (or not, depending on placement). Either that or your extremely drunk, which I still refuse to believe happens as much as I've been told. It's taking the saying "wearing your heart on your sleeve" and putting it in the literal sense. Some people's tats can be so personal, yet there they are. In my opinion, that's really awesome. To be that comfortable, to just not care what people are going to think. It's also a good bullshit blocker. People are either going to like you for who you are or they're not. Tattoos are an intense way to express yourself. And I really admire people who do express themselves in that way.

I won't lie, I totally want a tattoo. Nothing major, no sleeves or anything big. Probably something small on like my ankle. (I would choose like the most painful place, but once I get something in my mind I can't let it go.) Something meaningful that's there forever. I kind of like that concept.
Posted by Kate at 11:43 PM 2 comments: