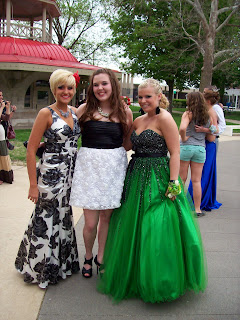 Prom was actually pretty fun. Of course, some parts weren't so good. He showed up late to my house to pick me up. Which was the first bad thing. Mostly because I hate being late, hate hate hate it. My friends were mad at me, but they're usually the late ones so I didn't really mind it. This alone wouldn't have been that bad, except he didn't get me a corsage. Really, I mean really?! So that was awkward seeing as how I got him a boutonniere. [I told my cousin Josh and he was really mad. I'm basically the youngest cousin so they all feel really protective of me.] When we, finally, got to the fountain it went fine. I kind of feel like it was awkward for him, but I was having fun with my friends and their dates so I really just didn't even care. It's his own fault if he doesn't know how to be social.

We went to Fuji for dinner which is a Japanese steakhouse. They have hibachi grills or you can sit at a table and get sushi. We sat at a table and ate sushi. The plus side is that my friend Blake is a hostess there and all the chefs love her so they gave us a bunch of free food. Score! It might have been a bad time for him. He didn't even make an effort! I don't know if he's just socially awkward or what. Don't be thinking I was being a bitch to him, I really did try. But I didn't want to spend my whole night babysitting so I ended up giving up on it. But it was weird because on the drive to the dance he was really talkative. I just don't get him.

I thought at the dance he would just ditch me, I mean that's why I said I'd go with him. But I'd be having a blast dancing with my friends and suddenly he'd just be there. Helloooo creeper status. I basically just kept blowing him off. I'll admit at first I felt like a bitch, but then I just didn't care. We slow danced and he was doing that thing where they try to very nonchalantly pull you closer to themselves. But I was doing this little shuffle thing backward at the same time so I ended up closer to the couple who was dancing behind me [they were friends of mine, don't think I was being the awkward one]. Other than that the dance was sooo much fun. I'm usually not much of a dancer [because I'm terrible], but when you realize that, hey, so is everyone else you just don't care anymore. [I mean, let's be honest, most white girls from the middle of nowhere can't dance.] I was sweating by the end of the dance.

After the dance is post prom at the sports center. They have blow up obstacle courses, soccer, basketball, volleyball, indoor golfing, rock wall climbing, and at the end of the night a hypnotist. He dropped me off at my house to change with my friend Kayla and her date Jamal. I was gonna try and hitch a ride with them but he came back to pick me up. [On the way there we listened to some weird ass music. Usually I'm not one to judge, but this was freaky. Some guy was moaning about killing someone and a bunch of other stuff I don't care to describe.] I didn't see him pretty much the whole night, post prom's from 11pm to 6am. We did all the stuff in 3 hours so we were really tired about halfway through. It was cool though, because we ended up chilling on the blowup obstacle course and talking. That's when I know I have good friends, all you can be doing is just talking and that's fun. It's enough, there really isn't any effort in it.

I realize this is a really long post, so I'm almost done. After post prom my friends, their dates, and I decided we wanted to get McDonald's breakfast. This puts the final nail in my bitchiness to him, but oh well. As we were walking out I go, "Oh by the way, I'm gonna go get breakfast with them. Bye!" Yeah. Don't even tell me. I already know. But in my defense he hadn't been all that gracious either! Like my friend Morgan said, I probably would have been better off going by myself. [Or my friend Chase. Doh! Why didn't I think of him?!]
I'm happy to say this will probably be the last time you hear me speak of him. And no, I don't mean Voldemort [anybody? anyone?] All in all, a fun, if slightly awkward, prom. Nothing more or less than I expected.

I couldn't imagine not having my family in my life. For the obvious reason, I literally wouldn't be here if it weren't for my parents. Well, duh Kate. But, seriously, I couldn't imagine not having them in my life, not being close to them. My whole life we've been a super close family. Every summer for as long as I can remember we go on a family vacation. Last year we went to Tennessee, this year we're going to Colorado for the 3rd time. I guess it's because of all the things like this that we do together. As much as I fight with my mom she's an incredible woman and a huge support to me. She really is one of the strongest women I know and she's helped me through so much. And I've already dedicated a whole post about my dad.

My brother, Conor, and I haven't really been all that close growing up. I mean, obviously, we're pretty close considering we're only 3 years apart and have lived together our whole lives. But we're not like best friends. We fought an awful lot when we were younger. Sometimes it got so bad that while my parents were at work she'd call my gramma. My grandparents live like 4 streets away, so she'd just show up. That's when we knew we were in for it when our parents got home. But as we've gotten older we've gotten closer. We've realized that it's not worth it to be fighting all the time. Now we have actual conversations and make time to do stuff together. And I know that as my older brother he'll always be there for me when I need him.

It's just hard to imagine not having that support system I've grown up with. We've definitely been through some really tough times. It amazes me how we've managed to get through them together and still remain as close as ever. I'm so extremely grateful and thankful to have them. And I know how incredibly lucky I am. It really does make me sad that some people just don't have that. I hope that some day when I have a family of my own I can provide my children lives the way my parents have for my brother and me.


My life since Sunday:
So as you can guess I'm a pretty sight right now.
Not that I'm complaining or anything! The plus side? No school on Friday because of the band trip to St. Louis. Wooh! And I promise promise promise that I'll post my prom pictures soon. I just haven't gotten around to uploading them to my computer.

Labels: band, embarassment, i could really go for some ice cream and a hug, life, people can suck it, stress, tragedy

What I couldn't bring myself to do. 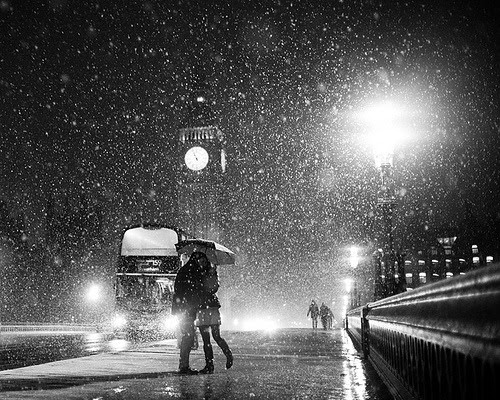 I could have kissed him. I could have turned my face towards his, looked him in the eyes, and let him pull me closer. But I didn't. Because he's not you. Because he can't make me laugh the way you do. He doesn't make my heart race the way you do by just looking at me. He tries too hard at everything you can do without even thinking. Whenever I'm with him I'm wishing away every single second that you were there instead of him. I wish away every single second of every single day that you are here with me.
Posted by Kate at 9:22 PM 1 comment: