Whenever I eat an apple I always make sure it still has the stem. I heard somewhere, when I was like 5 or 6, that as you twist off the stem, say a letter of the alphabet with each twist. For example, the first twist is A, the second is B, and so on. Then, whatever letter the stem comes off at is the first letter of your true love's name.

It's probably just some old wives' tale. I mean, what are the chances of getting the same letter every time? It never fails, though, I do this every time I eat an apple. Call it superstition, habit, hope. I just like the thought of it. Something so grasping, true love, being found in an apple.

Who knows? Maybe it is true. I've gotten the letter I quite a few times... I should start keeping a tally of each letter.

I know I've talked about this before so I'll keep it short and sweet. But I wish I could change what happened at homecoming with my friend/date and how I handled the whole thing afterward. I handled the situation all wrong. I hurt his feelings and messed with my own head. I knew how I wanted our relationship to be (friends only) and now I have to admit, like a big girl, that I might have led him on a bit. Not on purpose. I would never do such a thing intentionally. But, nonetheless, it happened. And then I just ignored the whole thing like a big poop. I wish I could change it. But I can't. I've finally dealt with it. And I've also apologized. After the whole thing, I can't say we're friends anymore. Which sucks. However, I knew it would end up like this somehow, someway. Because I don't believe that two people can be friends when one of them has feelings for the other. The only thing I can do is move on and not put myself or anyone else through this whole mess again.

[This picture is from the homecoming game. I didn't want to post a picture of him.]

You guys. You guuuuuuuuuuuuuuuuuuys. My Packers lost. We came into the play-offs with a 16-1 record, so close to the perfect season. And then in the first game we played in the play-offs we lost to the Giants. It was bad. Soooo bad. The receivers just pooped out. The top rusher was the freakin' quarterback! I feel heartbroken. And lost. I want to cry but I can't. I just. I. Ugh. No words. None of them. No more.

Thanks for the input about e-readers! Now I'm kind of questioning whether I want a Nook or a Kindle. At first I was like 99.99% about a Nook, but now I'm not sure. I'm going to Target tomorrow and possibly Best Buy so I'm definitely going to shop around some. And probably read up on e-readers online. I would say I'm still leaning more towards the Nook.

And now I think I might go have a good, long cry. le sigh. Until next season, I guess...

Labels: addictions, books, dreams, embarassment, empty, i could really go for some ice cream and a hug, Packers, people can suck it, wishing

I finally got my snow! It didn't actually snow much at all, just a thin blanket. But that's all right with me, any snow will do. So now I get to wear my snow boots for a legit reason and no one can call me out on it. So there.

And my copy of The Fault in Our Stars by John Green came in the mail today! I haven't read it yet so I can't really tell you about it. But this author, John Green, said that he would sign every pre-order and first printing of the book. I think there were something like 180,000 or possibly 200,000 copies. Super intense. No one can ever say that he doesn't love his readers. His brother Hank drew "Hanklerfish" on some of the copies and his wife the "Yeti" drew Yetis on some other copies. Sadly, I got neither. But I'm happy that I got a signed copy! 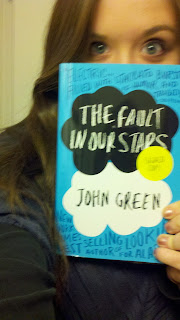 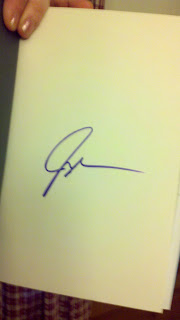 Also I'm considering getting a Kindle or a Nook. Any suggestions on which is better? I'm finding out that Kindles break more often, but any input you have to offer is greatly appreciated. Happy Friday the 13th!

To be honest, I'm not even trying to get this done before the month ends. I give myself a week after.

BAND: Fall Out Boy Let me be straight with you. Middle school and freshmen year I was a bit of a scenie weanie before the "scene" thing kind of took off. I was absolutely OBSESSED with Fall Out Boy. I think I've mentioned it before, but I am a proud owner of all the albums that Fall Out Boy ever put out. Including the obscure acoustic album and the album that they didn't even promote. I know all the words to pretty much every song. Except for the non-promoted album and the last album [the last album was complete crap, sorry boys]. This month it's been more of a nostalgia thing. I still think they're pretty good. I mean, Patrick Stump's voice is amazing. I wouldn't necessarily recommend them. But if you want to, it won't be a waste of time.

SONG: "Santa Claus is Coming to Town" Come on people, it's Christmas! But I want to be specific about this one. My favorite recording is by Hilary Duff on her Santa Claus Lane album. From 2002. Classic Hilary Duff. And I don't really give a crap that her voice was auto-tuned the crap out of. It's Hilary Duff. I just love her so much.

BOOK: The Hunger Games If you don't know about The Hunger Games I don't even know what to think. I reread it because my friend Kayla was reading them for the first time and I was a little jealous. It's just so good! I'll give you a little bit of background, although I think pretty much all of you probably know about it already. It's set in what used to be a part of America, after a huge war. There's twelve districts all being controlled by the Capitol. Every year they host the Hunger Games where two tributes, one boy and one girl, from each tribute have to fight, or just survive, to the death until only one remains. I guess this way the Capitol can remind everyone how big of jerks they are and the power that they have. The book follows Katniss Everdeen and her experience with the Hunger Games. It's the first in a trilogy and I'm begging you to read it if you haven't already. There's even a movie coming out in March, I think!

BLOGGER: the lexical gap. Lex is probably my all-time favorite blogger. She's funny, witty, and tells it like it is. She has this whole series going on why she hates Twilight. I mean, that alone is reason enough. Seriously, though, her blog is so fun to read. She's really upfront about the way she feels about a certain topic/person/thing/etc. and actually gives rational thought out reasons [unlike a lot of people who think they make sense but just sound ridiculous]. If you don't follow her blog you're missing out.

YOUTUBER: wehavegirlfriends The funniest thing of my life. Three guys, Kevin, Mitchell, and Kyle, tell short stories from their lives. Most of them are about things that happened while they were in high school. Stories like parties, run-ins with cops, and girl issues. It may sound kind of overrated, but these stories are so freaking hilarious and not what you would expect. I laughed so hard I almost peed myself. It's actually more like a podcast with very crudely-drawn illustrations. As in, stick figures. Do me a favor and just watch one. That's all I ask. You will thank me for this.

TV SHOW: Sons of Anarchy I actually didn't watch any particular TV show series this month. All the shows that I normally follow had finished their seasons. My family did get Netflix this month, however, so I decided to watch Sons of Anarchy from the beginning. It's an FX series about a motorcycle gang club.Yes, a motorcycle gang. They live in southern California and run a car repair shop. While secretly running guns and eventually drugs.Listen I know it sounds weird that I like this show, but I can't stop watching it. Plus the main character is hot. In a different way. Watch it, don't watch it, but I'm obesessed.

VIDEO GAME: Super Mario Bros. Wii I bought this game with some Christmas money and it is awesome! It's kind of like a combination of the old school Mario Bros. and Super Mario Bros., with a completely different twist.It has a 4-player option and has a cool feature that I refer to as "bubbling." If you're about to die you can press A causing you to be caught in a bubble. Your teammate can then release you from the bubble. There's also some sweet new power-ups [propeller hat anyone? perhaps a penguin suit?! just to name a few] and some new moves. You can never go wrong with Mario.

THING: Snow boots! I bought these boots on sale in November in anticipation of snow. It's now January and snow has yet to be seen here. In fact, it was freaking 50 degrees this week! What the heck?! I am a cold weather person and the weather has been killing me. Especially because I got these freaking amazing new boots! Not that the lack of snow has stopped me. I wear them all the time. And I will continue to until springtime. So just try and give me crap, I don't care. 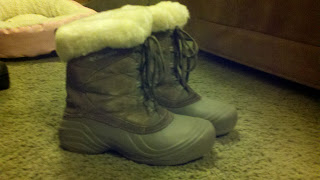 And now I need to go catch up on my blogs. Happy New Year!