This would be a picture of a Billiken. For those who don't know, which is probably most you, the Billiken is Saint Louis University's mascot. You may be thinking to yourself, what the hell is a Billiken? Don't worry, I thought the same exact thing. He started out as a kind of good luck charm in the early 1900s. If you bought one it would bring you luck, but if someone gave one to you, you had better luck. I think it was more of a Japanese thing, than American. But SLU supposedly chose him as the mascot because it's said he resembles coach John R. Bender [I would be slightly insulted if I were him].

I recently went down to St. Louis with my parents for a campus tour of SLU. And I have to say, as of right now, SLU is probably my top choice for college. It's completely different from all the other colleges I've looked at. Most of them are in towns similar to the one I live in, which isn't that big. Originally, that's what I wanted, to go to a small college in a town like my own. But now I'm not so sure. It would be totally different from what I'm used to if I went to college in St. Louis or Indianapolis. SLU is definitely the biggest, it has 8,000 undergraduates and 5,000 graduates. This seems kind of intimidating to me, but I think I could handle it. While it is a 2 hour drive from my hometown, I do have family that I'm close to living in St. Louis. The campus was big, to be expected, but it was gorgeous and didn't seem as overwhelming as I thought it would be. Most importantly, is the accounting program, I could get my masters in 5 years! The shorter I have to be in college, the better. But we'll see how it all works out. I've still got to get through applying and my senior year.

Nerdin' it up, Harry Potter style.

In honor of the premiere of Harry Potter and the Deathly Hallows Pt. 2, I thought I would share my dad's Father's Day present with you guys. 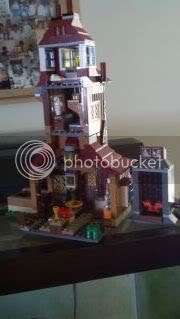 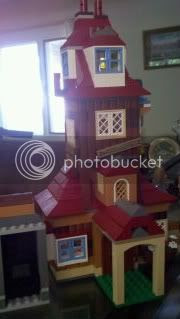 Yes, you are looking at a Lego replica of the Burrow. I saw it at Wal-Mart and just knew I had to get it for him. I wish I could show you guys all the details on the inside. All the little cabinets open and have things in them, there's a pig in the pen, the chimney actually does work (well it flips the little Lego characters to the other side, still impressive). There's just so many neat little tricks.
I could go on and on and on about the Harry Potter series. I saw the first movie in the second grade and decided to read the first book. From that point I was hooked for life. My dad was drawn in, too. It's one of the things that's made us have such a close relationship. My mom goes to see the movies with us, but she's not a die-hard fan like we are. Because I was so young when I first started reading the books, I've literally grown up with Harry Potter. I know there are tons of people out there like me. It's really kind of bittersweet this all coming to an end my senior year of high school. The outside world is becoming glaringly real to me, I'm growing up. I'm not ready for it to end, but I am.
I'm so grateful to have had such a wonderful childhood full of magic, Hagrid, grindylows, and so much more. Harry Potter has been, and always will be, my weakness. I'll always tear up when I hear that music start up (you know what I'm talking about). Whenever I read or simply look at books 5-7 I'll have sudden flashbacks to my dad and I at the midnight releasings. Especially the one where we got home at 1 am and left for Colorado 7 hours later. And I'll always be willing to discuss in minute details every plot twist and character at the drop of a hat. 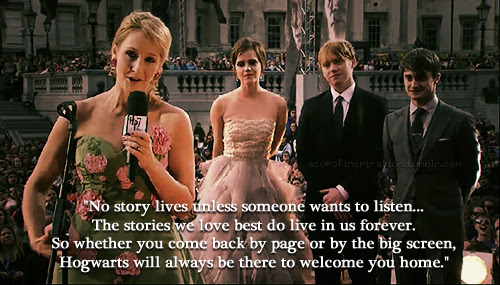 I'll leave y'all with a couple links you should seriously check out if you're a Harry Potter nerd. Which means you might have already seem them. Nonetheless. This video literally had me bawling like a baby. God knows what I'll be like when I go see the actual movie tonight. And this is just a wrock (wizard rock) music video. There is a ton more Harry Potter stuff on my Tumblr, so if you're interested the links over in the side bar. Hope you enjoy!

Labels: and other fun stuff, books, Dad, escape, fairytale, growing up, i could really go for some ice cream and a hug

I was scared of this day because I wasn't sure who I was going to chose. Should I chose Emma Watson, simply because of how talented, determined, smart, etc she is? Or should I chose my grandmother because of how strong and spunky she is? There were so many different ways I could have gone with this. But when I heard about Dame Maggie Smith's story I knew instantly I was going to chose her. For those who don't know, or realize, who Dame Maggie Smith is, she's the actress who portrays Professor McGonagall in the Harry Potter movies. I was perusing my tumblr feed a couple days ago when a post caught my eye. In it I saw something about Dame Maggie Smith and breast cancer [whaaaa?]. Apparently she filmed Harry Potter and the Half-Blood Prince mid-treatment for breast cancer. “I was hairless. I had no problem getting the wig on. I was like a boiled egg." If that's not inspiring, I don't know what is. I find it hard not to look up to someone who survives on pure dedication and will power. [Here's an article from 2009 where she talks about it.]

A (Not So) Textual Love Affair

Have you ever gotten this text "hey:)"? I have, on many different occasions. Who am I kidding, more like once. I absolutely despise these kinds of texts. They're very vague. It could mean: Hey, I like you but I'm too scared to actually tell you so I'm just going to send you a smile. Or it could mean: Hey, I'm just trying to show you how special you are, opposed to every other girl I text, by not only texting you, but smiling. However, I choose to interpret it to mean: Hey, I'm not very creative and can't start a conversation; therefore, I'm going to fake it and force you to be the creative one. Admittedly, there are probably hundreds of different interpretations. But any way you do it basically comes down to one thing: laziness. I feel like if someone really does like you they should put the work in to show it. Or if they're a player, they should get some new moves, because eventually it's going to get old.

You may be one of those people who actually like getting this text. And that's nothing against you. Yeah right. Besides the whole laziness factor, I think my dislike of this text stems from my hatred of emoticons. I just don't like them. Especially the winky face, it makes a simple text suddenly seem so dirty. The only thing I want making me feel dirty is Leonardo DiCaprio. However, if you decide to go with typing out the emoticon [happyface, winkyface, sadface, etc.] I find that entirely acceptable. Mostly because I like irony, partly because you can get creative. [Poopface, crapface, shitface, fu---- You get the point.]

Most of the time I won't bother to grace the texter with a response. I can already tell that the conversation's going to be a riveting one:
And then I don't respond because I hate it when someone a) makes that dumb "ooooh you're a girl, you should be in the kitchen making sandwiches and getting me some Natty's!" joke, b) has something else they want to talk about but expects you to just know and start talking about, and c) uses abbreviations when it would be much more simpler just to SPELL THE DAMN WORD OUT. Oh, and I have an extreme hatred for "lol." [But who doesn't nowadays?] I kid you not, I've had pretty much this exact conversation before. With multiple guys. Texting has taken the standard pick up line [Hey girl, are you from Tennessee 'cause you're the only ten I see!] to a whole new level. In fact, I think I prefer a lame pick up line to a "hey:)" text.

Aaaand now that you know my texting pet peeves... I guess this is why I really don't like to text all that much. I know it's a lot to ask for someone to be creative and original while texting, but seriously? It just seems a little ridiculous to be texting different people when you're having the same conversation with every single one. Got any pet peeves about texting? It only seems fair to ask you to rant since I just went on a big ole ranting rampage.