Last Wednesday. Ho-hum. Ever had one of those days where you look back and say, "If I had done this one little thing my day would have been ten times better." Or perhaps, " If I hadn't done this one thing I could have avoided a catastrophe mistake." Well that's how last Wednesday went for me.

It was a dark and stormy night... Okay, not so much. Actually, it was a normal day. So normal, that I really can't recall much of anything that happened that day. Or maybe this one incident just over-shadows everything else. I suppose I woke up, went to school, came home from school... And got a speeding ticket. Yep, my first ever. 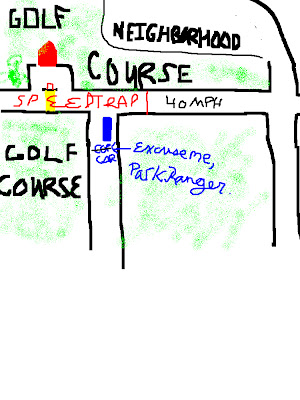 The neighborhood I live in is surrounded by a golf course. Not good. I hate the golfers. For some reason they think they're all hot and stuff and can do whatever pleases them. For the purposes of this post, please refer to the drawing I have beautifully created.

The horizontal street you see is the street I, and most of my friends in my neighborhood, take to get to and from school. Originally there was supposed to be an underground tunnel that connected both sides of the golf course underneath the street. However, due to poor planning on the park district's part, there was nay money to fund such a fairytale. Then they proposed closing the street altogether so the pretty little golfers could safely cross the street on their fatmobiles golf carts. Big no-no from the city. Instead, they put up a speed limit of 25 mph along about half of the street. The speed limit on the rest of the street is 40 mph, just as it has been for as long as I can remember. [You only have to go 25 mph when the light on the speed limit sign blinks. Which is pretty much all day.] See the street where the cop park ranger car is? Well it's pretty well known for park rangers to sit there and try to catch people speeding. This was actually the first time I've seen one there.

So I was driving along on my way home from jamming to some music. I'll be the first to admit that I don't actually go 25 mph. Usually I slow down to 30-35 mph over the cross walk and then speed back up. I mean, that's what most people do. As I turn into my neighborhood I look into my rear view mirror and see those stupid red and blue lights. At first I have this insane thought, "Okay, maybe I'm not getting pulled over. Maybe he's just trying to get around me." Duh. Of course not, I was just being stupid. He pulls over behind me and gets out of the car. "Miss, you were going so fast you were burning rubber!" Right, because tires burn rubber going 43 mph. Then he tried to tell me I didn't use my turn signal turning into my neighborhood. Which is a lie, I know I used it. [I've been told by many people I overuse my turn signal. But that's only because I hate it when people don't use it.] Mind you it wasn't even a police officer, it was a park ranger. He asks for my license and registration. And what do you know. I had forgotten my license. I think at that point I was ready to cry.

So after he comes back to my window after searching for my license number he says, "I could get you for four violations right now." Then he stopped talking and just looked at me. I think he wanted me to cry. Which I did, but that's not the point. He didn't need to be a jerk about it. Then he goes, "However, I'm only going to give you a ticket for going 43 in a 25." And, of course, he was all smug about it. I know he was being nice, but you could tell he knew he was being nice. Then I drove the 2 minutes I had left to drive to my house.

Now I have to go next Wednesday to the state attorney's office to get court supervision. Basically, if I don't get a ticket in the next six months the speeding ticket will be taken off my record. I have to pay $120 for the ticket and $100 for the court supervision. I'm so mad. Mostly at myself and a little at the park ranger. Plus any time I tell anyone I got a ticket from a park ranger they laugh. The one time I didn't get stuck behind an elderly person actually driving the speed limit there's a park ranger! Ugh.

Labels: embarassment, habits, i could really go for some ice cream and a hug, just my luck, on a more serious note..., people can suck it, rant, stress

I have honestly been putting this one off for a while. I've probably mentioned this before, but I have a thyroid disease that slows down my metabolism. We first learned about it when I was ten. From that time period on my biggest insecurity has been my weight. I know I'm not obese, or even big. But there were definitely times in my life when I felt that I was. I struggled so much when I was younger with my weight. I would see all my friend and think to myself how unfair it was that they were skinny and I wasn't. Why couldn't I be like them? I would get all into exercising and eating right. Then suddenly I would ask myself why. It didn't matter how hard I tried, I'd never be like them. Because of this my weight has fluctuated a lot over the past four years.

Until recently I couldn't deal with the emotional stress of being overweight, and then not, and then being overweight again. And so on. Now I find it easier to accept that, yeah, I may never be skinny. I may never be a size 2 or even a 6 or 8. But that's okay. The most important thing to me now is just being healthy. Eating right because I feel good and whole afterward. Running not because I enjoy running, but because I have more energy. Don't get me wrong, in doing these things I do hope to be more slender. I also haven't completely thrown my weight issues out of the window either. I don't think I ever will. But I am able to make myself understand that I'm not perfect and neither is anyone else. Comparing myself to others isn't healthy, and no good can ultimately come out of it.

*This picture is from my eighth grade trip to Washington, D.C. I consider this the low point of my self-esteem problems.

How to Procrastinate Like a Pro
by: Kate
The things that I've done instead of writing my persuasive essay for English 101:
I like to think of myself as the master of procrastination. I have, however, researched some sources for my essay. And I did get my senior pictures taken today. Now I'm going to goof around a bit more until The Real Housewives of New Jersey starts at 9.

Because being a princess is overrated. 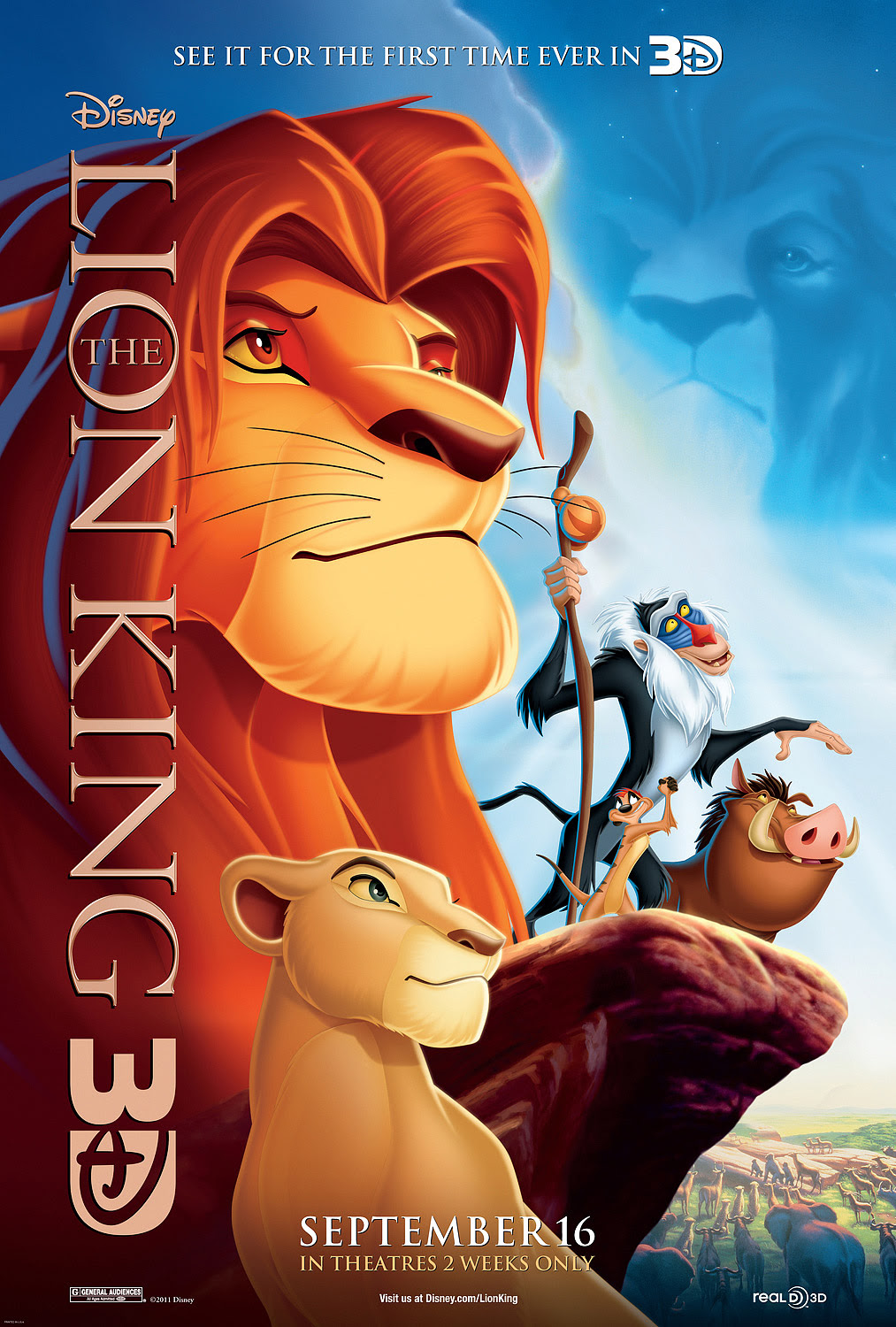 You guys. Lion King 3D is coming to theaters! Usually, I'm all against 3D movies because it seems like that's all there is any more. Plus 3D movies tend to give me a head ache. But Lion King was my all-time favorite movie when I was a little kid. We had it on VCR (so old school, I know) and I watched it so many times the tape literally wore out and doesn't work any more. I don't care if I can't find anyone to go with me. I will willingly be the older creep sitting by herself in the back of the theater.  Now if they only made a Lady and the Tramp 3D my life would be complete. I guess I was more of a talking animals type of girl than princess.

....That's all really. I just wanted to make sure you all were informed. You can thank me now.

Labels: and other fun stuff, dreams, if you don't get this title then get off your butt and educate yourself gosh dang it

A couple weekends ago I went to the Illinois State Fair for the first time ever! Needless to say, I was pretty excited. I went with my friend Kayla and her parents. It's basically like every other fair, but bigger. And at the Illinois State Fair they have this thing called the butter cow. You may be saying, "Now, Kate. Every cow is a butter cow." To that I say, but is every butter cow MADE FROM butter?! No, no they are not. Every year a cow is sculpted out of 500 or so pounds of unsalted butter. It takes like a week to sculpt the whole thing, and they reuse the butter 5 times before using new butter.

Now if you can't tell, in the bottom right corner there's a little butter piglet. Each year they change the theme of the scene and I believe this year's was a farm scene. I think. I'm not quite sure. But here's a picture of the butter piglet up close. 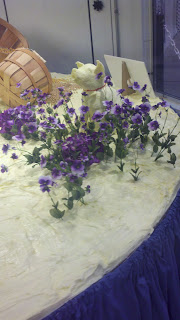 Because Kayla's all artsy and whatnot she wanted to go check out the art competition. I was like sure, it's air conditioned right? All kidding aside, some of the art was outstanding. There was this really cool portrait that I wanted to show you guys but one of the judges was sitting right next to it and I don't think you're allowed to take pictures. I wasn't sure and didn't want to get us kicked out.

Then last weekend I went to a hot air balloon festival with my friend Morgan, her sister and brother-in-law, Kayla, and Jordin. It was sooo cool. I think I'd only seen a hot air balloon once in my life. It was too windy for the balloons to go up though. Too bad, because I was totally willing to pay the $250 per person for a ride... Not. 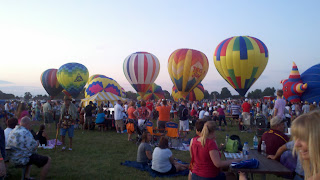 And that's my past two weekends in a nut shell! I actually just got back from boating with Kayla and some of her family. There's nothing better than chilling on the lake, star gazing. While I fully enjoyed myself at both of the fairs, there's something to be said about just taking it easy and relaxing. Sometimes you just have to take time to appreciate the little things in life.


Aaaaaand, cheesy moment's over. Seriously people, the butter cow really is something worth seeing. Simply beautiful. I plan on going next year.